Bows are a popular weapon in Minecraft. To get the most out of your bow, you’ve got to enchant it. There are 7 enchantments for bows in Minecraft. Let’s take a look at which bow enchantments are the best. In this post I’m going to rank them in order of effectiveness, starting from the weakest and moving up to the most powerful enchantment. However, since enchants are situational you have to take this tier list with a grain of salt. Sometimes an enchantment for your bow that’s lower on this list might actually be perfect for a certain situation. 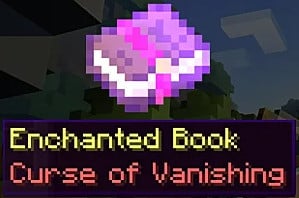 Effect: Item disappears when player dies
How to get/make: Curse of Vanishing can not be created with an enchantment table. In order to get it you have to find it in the world (dungeons, chests, villages etc).
Maximum level: I

In singleplayer Curse of Vanishing is pretty much useless. After all, who wants their bow to disappear when they die? I highly recommend you to NOT use this enchant if you’re player singleplayer.

However, in a multiplayer PvP environment this enchant can be very useful. Imagine you’re raiding someone else’s base and die. If you have your bow enchanted with the curse of vanishing your opponents won’t be able to pick it up and use it against you.

Punch knocks the enemy back on hit. This can be very useful for kiting enemies so that they can not get to you. The punch enchantment also allows you to hit enemies into lava which is a quick way of killing them.

However, there is a drawback to punch that many players overlook. If you use a bow with the Punch enchantment when you’re chasing a someone it will knock them away from you. This makes it much harder to catch up with them because you’re effectively making it easier for them to get away from you.

Effect: Increases the damage your bow does with every shot.
How to make: Enchanting table/Anvil.
Maximum level: V

By adding the power enchantment to your bow you’ll increase the damage you deal with every shot. The fact that this enchantment can reach up to level 5 means that when you’ve got it fully enchanted it can deal a serious amount of damage to enemies.

The power enchantment will increase the damage you deal with your bow by these percentages at the different levels:

Power I to IV can be obtained through the enchantment table, just like most enchantments. However, the last level, Power V, can only be obtained by using an anvil. To get it, go to an anvil and combine 2 bows with the power IV enchant. You’ll then receive a bow with the Power V enchant.

The power enchantment is very strong, but the reason why it’s not higher up the list is because it’s pretty difficult to get to Power V. Getting 2 bows with Power IV is easier said than done.

Effect: Set your enemies on fire when you hit them.
How to make: Enchanting table.
Maximum level: I

Personally, this is one of my favorite enchantments. As you can guess from the name, it sets enemies on fire when you hit them with your bow. Not only is this a lot of fun, it’s also quite powerful. Setting your enemies on fire with the flame enchant will cause them to take damage over time.

The effect is also pretty neat, since you can see that your arrows are on fire when you fire them. 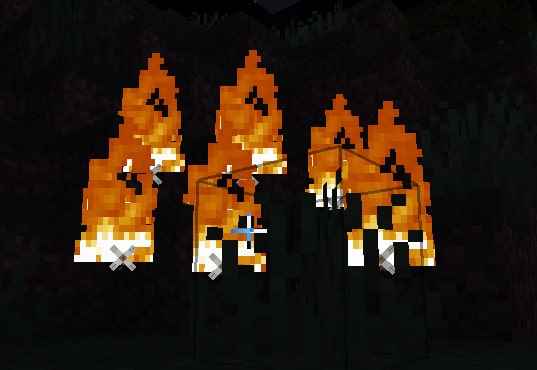 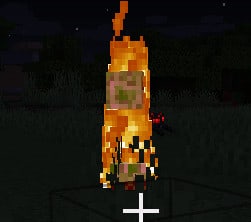 The arrows also stay on fire after you’ve shot them until you pick them up. Definitely one of the most fun enchants in the game.

One thing to note about this enchantment though is that the fire arrows do not work in the rain, which makes sense.

Effect: Infinite arrows as long as you have 1 arrow.
How to get: Enchanting table.
Maximum level: I

Infinity doesn’t increase the power of your bow, but is more of a convenience thing. As the name suggests, this enchantment will give you access to unlimited arrows. As long as you have 1 arrow in your inventory you can keep shooting your bow.

Infinity is a nice enchantment because it gives you an unlimited amount of arrows. The reason why this is useful speaks for itself: you no longer need to bring tons of arrows and you no longer need to craft them. Arrows aren’t that expensive to craft, they only cost 1 flint, 1 stick and 1 feather to create 4 arrows. Later in the game you’ll have plenty of these resources so that shouldn’t really be an issue. That’s also the reason why I didn’t put the infinity higher than number 3. The power level of the enchantment isn’t that high, but the convenience it gives makes it deserving of the number 3 spot of best bow enchantments in my opinion.

This enchantment is great simply for the convenience it offers. The fact that you don’t have to carry tons of arrows with you whenever you’re planning on using your bow is amazing. In addition, you’ll save a lot of time having to farm and craft the arrows themselves.

Effect: Repairs your bow using experience.
How to get: Enchanting table.
Maximum level: I

The mending enchantment is very strong and in my opinion definitely belongs in the top 3 best bow enchantments. Mending doesn’t increase your damage in any way, but it does give another very useful benefit.

Whenever you kill an enemy with a mending enchanted bow it will use the experience the monster drops to repair your bow. This means that your bow will pretty much never break as long as you accumulate enough experience with it.

Effect: Increases the durability of your bow.
How to get: Enchanting table.
Maximum level: III.

Unbreaking is in my opinion the best bow enchantment in Minecraft. It comes in 3 levels, the higher the level of your unbreaking enchant is, the lower the chance that your bow’s durability will decrease. If you have Unbreaking III your bow will last on average 4 times longer than a bow without unbreaking.

The formula for how the Unbreaking enchantment works on bows goes like this:

There is a (100 ÷ (level+1))% chance that shooting your bow decreases its durability. On average, tools last level+1 times as long.

The reason why I rate Unbreaking higher than Mending is because Unbreaking can be combined with the infinity enchantment whereas the Mending enchant cannot. This allows you to create in my opinion the ultimate bow in the game; a bow with Unbreaking III, Punch II, Power V, Infinity and Flame. 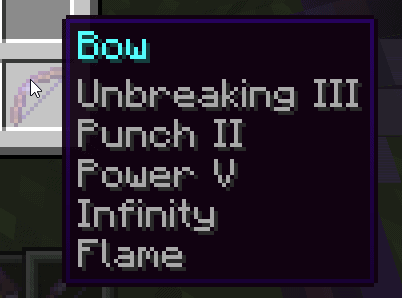 Sure, if you have the mending enchantment your bow won’t break because it’s being repaired with XP, but I prefer accumulating the XP and using it for what I want rather than using it to fix my bow.