Wondering who the best girls to use are in Girls X Battle 2? Wonder no more. Our Girls X Battle 2 Tier list will give you an overview of which girls are the best in PvE and in PvP. We base our rankings in the tier list on many different aspects such as stats, usefulness and whether they’re a good fit in top tier teams. Let’s get into it.

This is a tier list focused on end-game PvP. There are girls in the game that can be very strong in the early/mid game that didn’t make it on this tier list. The reason for that is that they tend to fall off in the late game.

S+ Tier:
Girls in S+ Tier are meta defining, an auto include in any team.

S:
In S tier you find the girls that can perform well in pretty much any team, but are slightly weaker than the ones in S+.

A+:
Very strong in the current meta. If used properly they can be just as strong as the ones in S tier but they require more planning and thought.

A:
Strong girls, require careful thought and planning but can perform well in the right team.

B:
The girls in B tier can be strong, but require a good team comp to be effective. Usually there are girls in higher tiers that can fill their role better.

C:
The girls in this tier have limited usefulness. There are almost always girls that perform similar roles better than these in higher tiers.

If you’d prefer to see the PvP tier list in image form, check out the image below (click to enlarge): 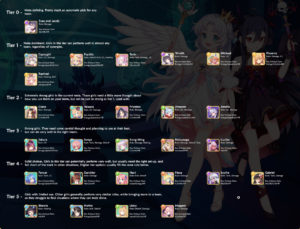 The Girls x Battle 2 PvE Tier list is focused mainly on high tier guild bosses. It’s impossible to make an all-encompassing tier list for every PvE part of the game but this is a good guideline to follow.

S+ Tier:
The girls in this tier excel in PvE and perform excellent in their role.

S:
Great choices. Will perform good in almost any team.

A+:
Good choices. Will perform good if they are used well.

A:
The girls in this tier can perform well, but there are usually better options in higher tiers that bring more to the team.

B:
The ones found in this tier have limited use. They can only perform 1 role and that role can be done better by a girl in a higher tier.

C:
Very limited use. Only bring if you’ve got nothing better to bring. 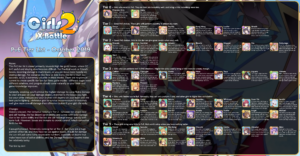 That’s all for our Girls X Battle 2 Tier list for PvE & PvP! We hope you’ve found it useful and that it taught you something new about which characters are good to use in PvP and PvE.

If you disagree with the placement of any girls in the list, let us know why in the comments down below. Additionally, if you feel like the tier list needs an update let us know as well.